This is a tribute post, as my grandfather died eight years ago yesterday, and I am most appreciative of his presence in my life.

When I heard the news, I didn't feel much, which was strange, given all that he had done for me and other people in his life.  A few days later though, as I was entering the funeral, it did "hit" me,  and the tears came.  My feelings arose when I saw my grandmother's hand on the lapel of her husband's dark blue suit, and then I saw my grandfather lying in the open casket.  I wondered to myself, " What is she going to feel when she wakes up tomorrow, and for once in fifty-odd years, he isn't there?"  I never once thought of the enormous impact that his death might have on her, until that moment.  The emotion welled up in me, and that image has been in my memory ever since, in great detail.

I was standing in front of the tombstones of my grandfather and our ancestors, when I heard the well-known hymn "Amazing Grace" from bagpipes.  Recently, I re-visited my grandfather's plot by the Trinity River.  There is a train bridge nearby and I walked across it to get there.  He worked on the trains, for a good while, and many times when I hear a whistle of a train, I feel him close by, checking in with me, guiding me on my life's path.

While we were cleaning out the house, we found his work gloves and they were given down to me.   I like feeling the way my hands feel in these gloves.  They have a soft, cracked leather outside, and matted cotton lining inside... like an old broken-in baseball glove.  The smell of the dirt, of sweat and sunshine and hard work and even his spirit is there if I really stop, and smell deeply.

These gloves are a part of my heritage, a very special part of who I am, though they are a simple pair of working gloves.  His work gloves have never left me, and I miss my grandfather.  Usually, they are in my truck, in case I need them, and I placed a book given to me from a dear friend, a book titled Amazing Grace, in between the two gloves.  I don't know why I did it, but it felt right, and the book rested there for a full day and night.  Now when I read the book and hear about the ways Grace shows itself in other people's lives, I feel my grandpa's spirit near. 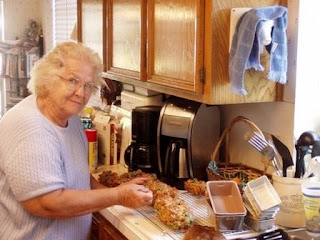