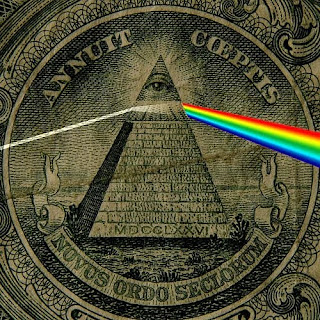 My dream the other night was powerful enough to get me to wake from it and write down my impressions.  I love getting inspiration in the form of vivid dreams; they are one of my favorite things.
I was getting dressed for work, and looking at the clock on the wall, I was late.  For some reason, one of the things I just had to do before I left, was to swallow two coins.  They were two quarters, I remember, and there was a lot of difficulty in getting them down.  I couldn't leave before I did this, and yet I was having lots of trouble chewing and swallowing two coins.  Yucky, nasty metallic things, not at all like a croissant, or a bagel, or some other normal breakfast food.  It was causing quite a bit of distress.  On the one hand, I was late and on the other hand, I just had to get those two quarters in my stomach.  There seemed to be no solution to this strange riddle... and I woke up.
And when I woke up, I slowly realized:  you can't swallow money.  It provides no nourishment to the human body, heart, or soul, for that matter.  The only way money has any value is by spending it.  Spending it wisely, of course, but spending it.
Now, there is another large theme that my dream represents, involving time and money.  And I refer to one of my favorite books on the subject when I say it's useful at some times to take a sideways look at time, and a sideways look at money.  What is really going on there behind the scenes?  Look beyond time to the energy that creates time, look beyond money to the energy that creates money.  And you'll see what is truly there.
That is one of my favorite exercises:  To look behind things, through things, around things, to leave no stone unturned, so to speak.  A lot of times people, myself included, get fixated on something, like a goal, or an idea, or a representation.  What is best to remember in those moments is that we are all searching for the energy behind our goals, our ideas, our pursuits of happiness.  Those things on the surface of reality are mere representations of the amazing collection of the energy behind it.
All the answers lie within, they were already there to begin with.  We are only simply encouraged by the world to return to this ongoing truth, again and again.  Look behind and around, take a sideways glance, and learn to see the essence of the world around you.
....The essence within me honors the essence within you.
A Sideways Look at Time by Jay Griffiths  (the book I referenced above)
Posted by Hendu at Saturday, October 17, 2009